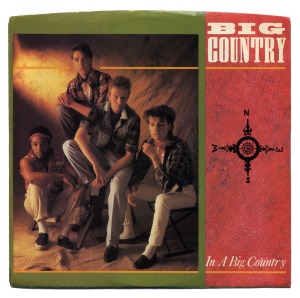 Big Country was a typical one-hit-wonder of the 1980s. Their self-named song, “In a Big Country” hit 17 on the Billboard charts and was a regular on MTV; when they actually played music videos. As much as I would like to dwell on the sweet mullets, rolled-up baggy pants, and fluorescent tank tops that were pop culture in the 1980s, the reason I bring this up is for something bigger than a top 40 song or Sun-In bleached hair. It’s the subject of theology; specifically what to call my theological position these days. What I have settled on is not “Big Country,” but rather “Big God” theology. What I mean by that is, in recent years, I have come to to see God bigger than I have ever seen Him before. I’ve come to see Jesus as more beautiful and the gospel more glorious and more precious than at any other time in my Christian life. That is the emphasis of my devotion, my ministry and my preaching; nothing more and nothing less.

The place I find myself in today, is the result of challenging what I have come to believe over more than two decades as a Christian. I have come to realize that, either by direct teaching or through evangelical osmosis, much of my Christian world-view was not purely biblical. In other words, much of what I had believed could be attributed to 21st century western evangelical culture as much as the biblical message. Specifically, what I found to be missing, was the message of the gospel. I had lost sight of the heart of what it means to be a Christian – the good news. I had wandered from the significance of a holy God loved sinners enough to send His Son to live a perfect life and die a sinner’s death in their place and that all who place their faith in Him will not only have their past sins forgiven, but they are declared eternally righteous (as righteous as Jesus) and that they would be adopted into His family. And all of that came because of what Jesus has done in their place. I had lost sight of my own desperate daily need for Jesus as Savior. I was working hard to make Him Lord, but somehow, that was no longer fueled by His amazing love for me as my Savior.

The rediscovery of that truth has changed everything for me; that is, it has changed everything about what it means to live as a Christian, not what it means to be a Christian. I believe in, as I always have: the trinity, the Bible, the need for personal faith in Jesus (God the Son) for salvation, the bodily resurrection of Jesus, the power of the Holy Spirit, the Church as Christ’s body on earth, the desperate need to preach the gospel to every creature, the return of Jesus, and an eternal heaven and hell; amongst other biblical doctrines. None of that has changed. Now that doesn’t mean that I haven’t cast off some beliefs. I certainly have. I have jettisoned the idea that I am capable of living a life that pleases God – based on the merit of my deeds (even the best of them). I have forsaken any Christian life that is based on an increasing ability to live up to God’s standards. Instead, I have embraced the gospel message that preaches to my heart, that being a Christian is not about me at all. Rather it’s about cultivating a deeper dependence on the One who lived up to all of God’s standards perfectly in my place. I have abandoned the enslaving notion that I must perform at a certain level to earn God’s love, acceptance and blessing. I have abandoned it because I already have all of those things in Christ by faith.

It is not that I have lowered my view of God’s holiness or His law, nor am I attempting to serve a desire to sin with impunity. On the contrary, what has happened is exactly the opposite of that. Today I have a much higher view of God’s holiness and His law than ever before; so much so that I realize that all of God’s holy demands are an unattainable standard. They are a crushing burden that will destroy even the most committed and righteous saint; if they are honest with themselves. That is what Jesus said in the Sermon on the Mount and what Paul said in Romans 7. Thankfully, I have also realized, that my only hope is to rest on the perfect life that Jesus lived in my place and not my ability to emulate it. The result of this change is astonishing and completely counter-intuitive.

Today I have a depth of devotion that I have never known before. I am experiencing a waning desire to sin that I previously though impossible. I also have an ever-growing desire to love and reach those who are far from God (those who Jesus spent most of His earthly ministry with). And not a lick of that has anything to do with what I’ve done or my commitment to the Lord. It is purely what He’s done for me and His commitment to me. I’m simply now coming to grips with it.

Understanding that I am rescued from my sin today, tomorrow and for eternity, and that every inch of Christian growth is based on what Jesus has done for me by grace, rather than what I do for Him, has produced in me a desire to live for Him with more abandon than two decades worth of white knuckles and clinched teeth. I suspect it is becoming obvious why I have named this transformation that has overtaken me, “Big God” theology. It is an understanding of who God is and what He’s doing in the world, that shows me every day, just how big and beautiful and glorious He is – and how amazing it is that He loves someone like me. That is what I believe and what I will preach until the day I see Him face to face. That is Big God Theology.